“I have not seen the wind,
I saw the clouds moving.
I did not see the time,
I saw the leaves fall.”
Eduardo Chillida

Chillida’s sculptures concentrated on the human form (mostly torsos and busts); his later works tended to be more massive and more abstract, and included many monumental public works.[4] Chillida himself tended to reject the label of “abstract”, preferring instead to call himself a “realist sculptor”. Upon returning to the Basque Country in 1951, Chillida soon abandoned the plaster he used in his Paris works – a medium suited to his study of archaic figurative works in the Louvre.[5] Living near Hernani, he began to work in forged iron with the help of the local blacksmith, and soon set up a forge in his studio. From 1954 until 1966, Chillida worked on a series entitled Anvil of Dreams, in which he used wood for the first time as a base from which the metal forms rise up in explosive rhythmic curves.[6] He began to make sculpture in alabaster 1965.[2] Rather than turn over a maquette of a sculpture to fabricators, as many modern artists do, Chillida worked closely with the men in the foundry. He then usually added an alloy that caused the metal to take on a brilliant rust color as it oxidizes.[7]

From quite early on, Chillida’s sculpture found public recognition, and, in 1954, he produced the four doors for the basilica of Arantzazu, where works by other leading Basque sculptors – Jorge Oteiza, Agustin Ibarrola and Nestor Basterretxea – were also being installed. The following year, he carved a stone monument to the discoverer of penicillin, Sir Alexander Fleming, for a park in San Sebastián (it subsequently disappeared, but a new version has been installed on the promenade at San Sebastián bay).[4] By the early 1970s, his steel sculptures had been installed in front of the Unesco headquarters in Paris, the ThyssenKrupp building in Düsseldorf, and in a courtyard at the World Bank offices in Washington

At their best his works, although massive and monumental, suggest movement and tension. For example, the largest of his works in the United States, De Musica is an 81-ton steel sculpture featuring two pillars with arms that reach out but do not touch. Much of Chillida’s work is inspired by his Basque upbringing, and many of his sculptures’ titles are in the Basque language Euskera. His steel sculpture De Música III was exhibited at the Yorkshire Sculpture Park in the UK, as part of a retrospective of Chillida’s work.

Chillida also conceived a distinguished oeuvre of etchings, lithographs and woodcuts since 1959, including illustrations for Jorge Guillen‘s Mas Alla (1973) and various other books.[2]

Chillida is one of the world’s most influential artists in the 20th century. 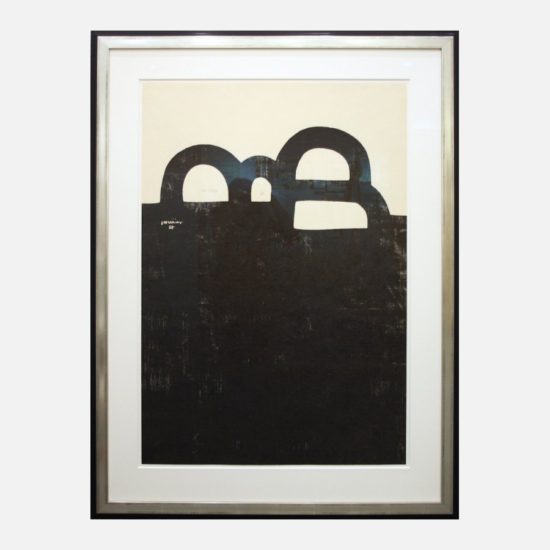